Thermal coal shipments from Indonesia have gained traction as about 2.1 million tonnes (mnt) will arrive at various Indian ports till 11 Mar'22, CoalMint vessel line up data reveals. Several power producers, that largely kept to the sidelines last year due to record-high prices, were also seen booking decent volumes as they focus on building stock ahead of the summer season.

The rise in shipments from Indonesia comes as miners have been actively fulfilling old contracts that were delayed by the unexpected coal export ban in Jan'22.

Rising power demand in India forced several producers to procure imported coal as the government in Dec'21 asked plants to import 10% of their coal requirements to avoid a repeat of the supply crunch last year.

Thermal power producers consistently raised the issue of uncertainty of rake allotment and coal delivery, preventing them in building stocks to normative levels by Mar'22. 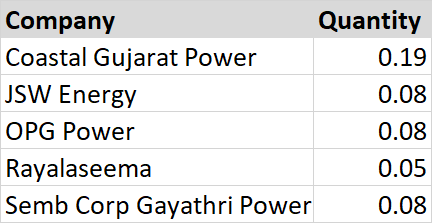 Around 1.14 mnt of South African coal will arrive at Indian ports. However, the major portion of it is booked by sponge iron players amid the coal shortage at their plants, as per market participants.

Over the last few months, shipments from South Africa decreased due to a severe coal shortage at RBCT Port. This compelled traders to offer advance booking for upcoming vessels.

Adani Enterprise is to bring the highest volume of 0.26 mnt at Dhamra and Krishnapatnam ports, followed by IMR Resources with 0.16 mnt at Ennore and Vizag ports.

Shipments from other origins

USA: Around 0.37 mnt of thermal coal will arrive at Kandla Port with Adani Enterprise bringing 0.25 mnt, followed by Swiss Singapore at 0.13 mnt.

Russia: About 0.08 mnt will arrive at Hazira Port for ArcelorMittal Nippon Steel.

Mozambique: A total of 0.06 mnt will arrive at Dahej Port for Hindalco Industries.

A total of 0.75 mnt of thermal coal is set to arrive at Mundra Port for Adani Enterprise and Coastal Gujarat Power.

This is followed by Kandla Port at 0.45 mnt for Adani Enterprise, Swiss Singapore, and Turnrest Resources. 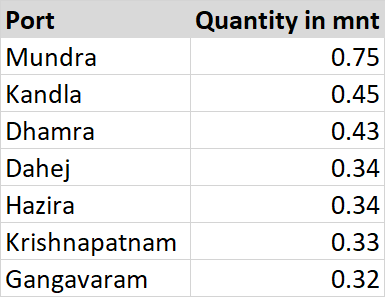