The company has offered 3.5 million tonnes (mnt) of coal for sales earmarked for the gamut of customers belonging to cement, sponge iron, captive power and other sub-sectors. Against this, the participants of a particular sub-sector will compete amongst themselves to secure long-term supply.

For the latest round, the tenure of the fuel supply agreement (FSA) against the quantity booked by the successful bidders will be valid up to 31 March, 2027.

Till date, SCCL has concluded seven tranches of auctions under the linkage scheme for the non-power sector between 2016-2022, wherein a total quantity of 12.81 mnt was booked and 179 FSAs were signed with the successful bidders.

Coal sales under the eighth tranche will commence from 27 January, 2023 starting with auctions for the captive power sector. Among the various sub-sectors, bulk offering to the tune of 1.85 mnt has been made for the cement sector.

Moreover, the company has specifically marked coal having high calorific value (G5-G9) for the cement as well as sponge iron sectors. On the other hand, the lower grades, falling in the G11-G13 band are being offered to the captive power units. 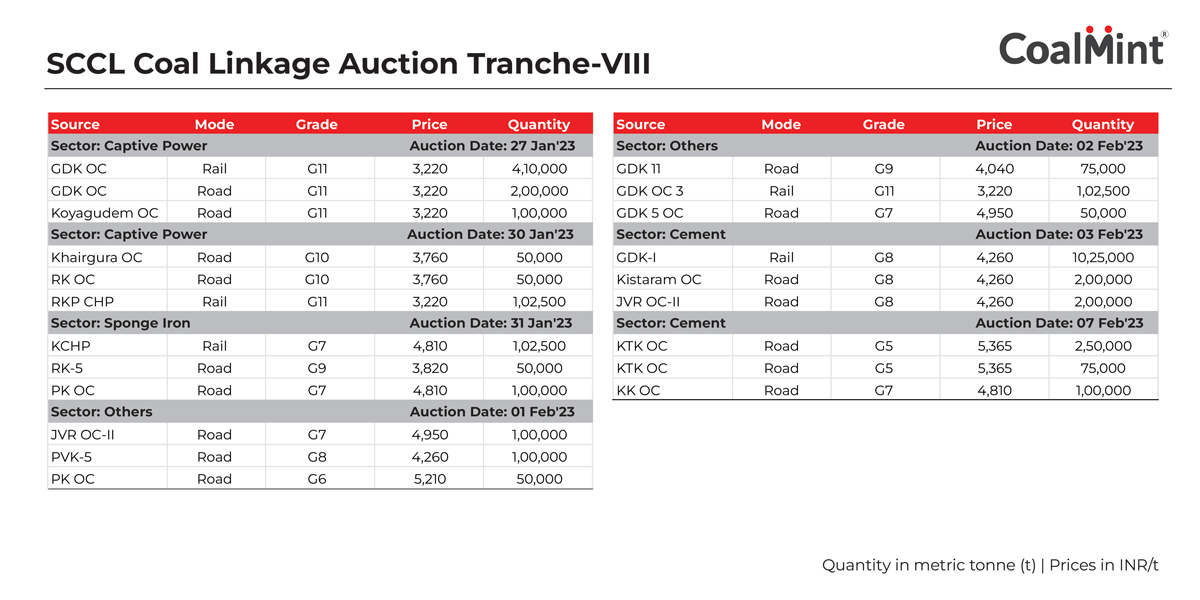 On the performance front, SCCL registered its highest-ever monthly coal production of 6.7 mnt in December, 2022, surpassing the previous high of 6.45 mnt recorded in March, 2022. Driven by this robust performance, the company's total production of 47.22 mnt during April-December 2022 upped 2% y-o-y. Production target for the ongoing fiscal (FY23) is 70 mnt.