The company had offered 37,500 tonnes (t) of coal of which the entire volume except 500 t from the Jogidih colliery was sold at a price realisation of INR 9,829/t. The rise in bid premium was assessed to be up by 184% against the average notified price of INR 3,464/t.

Despite the ongoing coal shortage, BCCL has been slow in raising coal allocations via spot auctions.

Notably, the company had garnered a bid premium of 69% over the notified price in the previous month's spot auction, which was the lowest among the remaining subsidiaries of Coal India.

However, with substantial increase in global coking coal prices, coke manufacturers were compelled to raise their bids to procure coal in auctions at comparatively cheaper rates.

Indicating a strong demand, the average bid price was in excess of INR 8,000 for 11 out of the 14 collieries which had offered coal in the auction wherein the reserve price was in the range of INR 3,786-6,233/t. 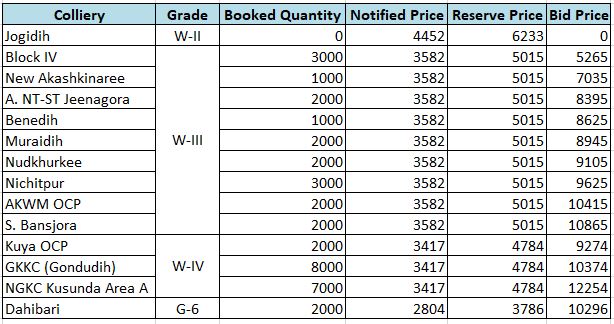 The highest bid price of INR 12,254/t was recorded for the washery grade-IV (W-IV) from the Kusunda colliery and it continued to command a higher price over the superior W-III grade.

The sole lot of G6 was sold at INR 10,296/t registering a substantial rise of INR 3,864/t from bid price assessed in the previous month.

Going forward, the gradual rise in coal prices is expected to bring about a consequent hike in coke prices thereby affecting the user-industry dependent on it.